Find out how Estonia’s PARE Union moved their general meeting online with the help of the Citizen OS platform. Plus, four top tips on rolling out a new tool in an organisation, thanks to the experience of our Partnership’s lead, Anett Linno. 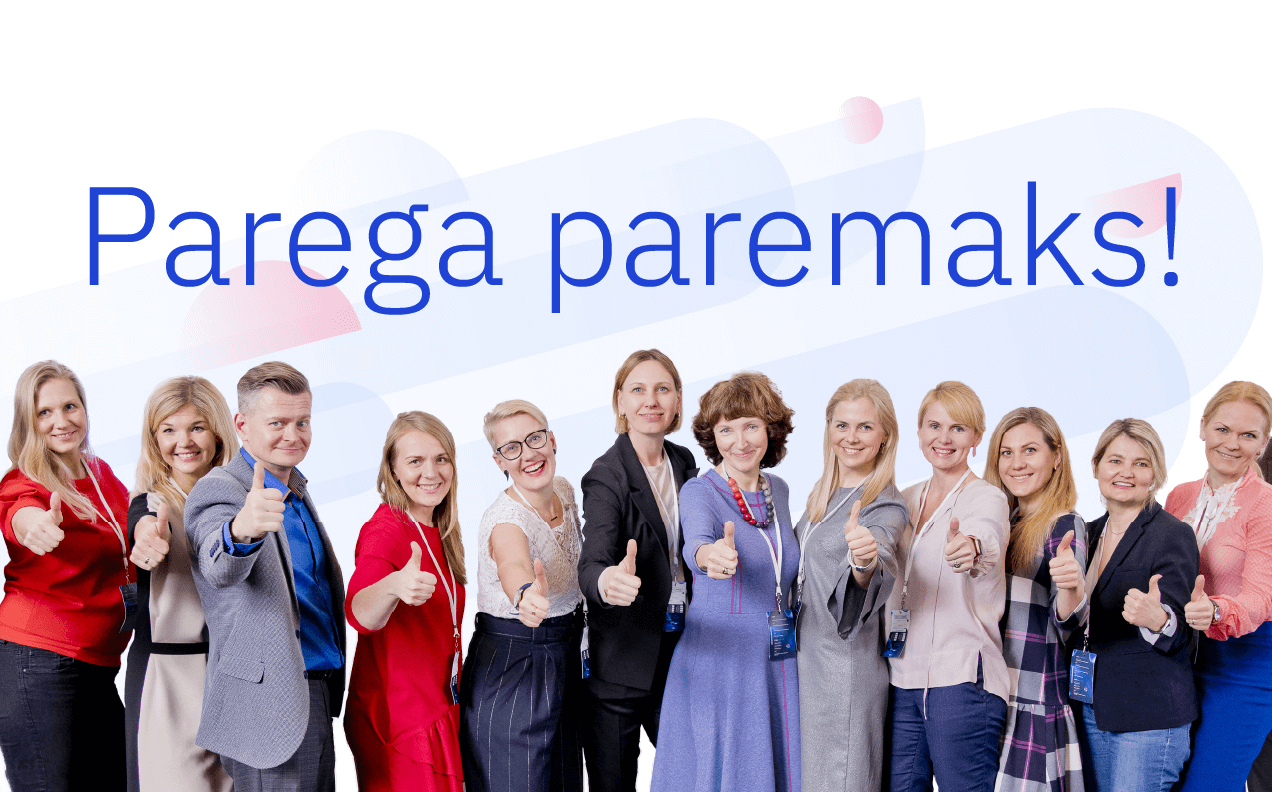 When faced with the problem of how to hold their General Meeting in the midst of a pandemic, the Estonian Resource Management Union, PARE, turned to Citizen OS for solutions.

Happy to oblige, we supported them through the process of rolling out our Citizen OS co-decision platform across the organisation, holding their meeting and collecting digitally-signed votes. These digital signatures—one feature of Estonia’s advanced system of e-governance—help the Union to meet new legal requirements for online meetings in the country.

Here, we talk to Kärt Kinnas, CEO at PARE, who gave us a step-by-step account of how it went, and hear from our Partnerships Lead, Anett Linno, on four key ingredients for the smooth adoption of a new tool in an organisation.

Tell us a bit about how the decision to use the Citizen OS platform came about?

Like in most organisations, the COVID-19 pandemic has forced us to do things differently—learning new ways of working and moving many of our activities online. We decided in Spring that our Autumn General Meeting would have to be held digitally this year.

In addition to the usual annual report and budget, we also needed to amend our Articles of Association and elect a new board—so it was absolutely necessary that any solution include digitally-signed voting, due to the new laws for e-meetings in Estonia. We also wanted the voting process to be simple and understandable, for both us as organisers as well as the meeting participants.

We discovered that all of this was possible with the Citizen OS platform. So we contacted Anett from the Citizen OS team, who offered to provide training on how to use the environment and to support us at each stage of the process.

Did you have any thoughts on how this might benefit your organisation in other ways – other than solving the problem posed by the pandemic?

All in all, we were hoping that this innovative solution would bring curiosity to try new tools in our organisation, and also give everyone an opportunity to get acquainted with the materials and cast their votes at a time that suits them—making the process more convenient.

But most importantly, we hoped it would give us the opportunity to involve as many members as possible in decision-making. Which is exactly what happened! A record number of voters attended this general meeting—more than ever before.

Brilliant. Could you talk us through your preparations for the meeting?

Once we had produced all the materials for the meeting, I created a group on the platform and added all the email addresses of the meeting participants. This was nice and easy to do—adding them all in one go. I then created a topic for each agenda item, with the relevant materials and explanatory text included in each.

We wanted to be able to give the members a chance to review the materials nice and early, and to create some discussion on the platform in advance of the meeting. So two weeks before the meeting I sent all our members the Citizen OS user guide and a link to the platform, where they would find the topics. 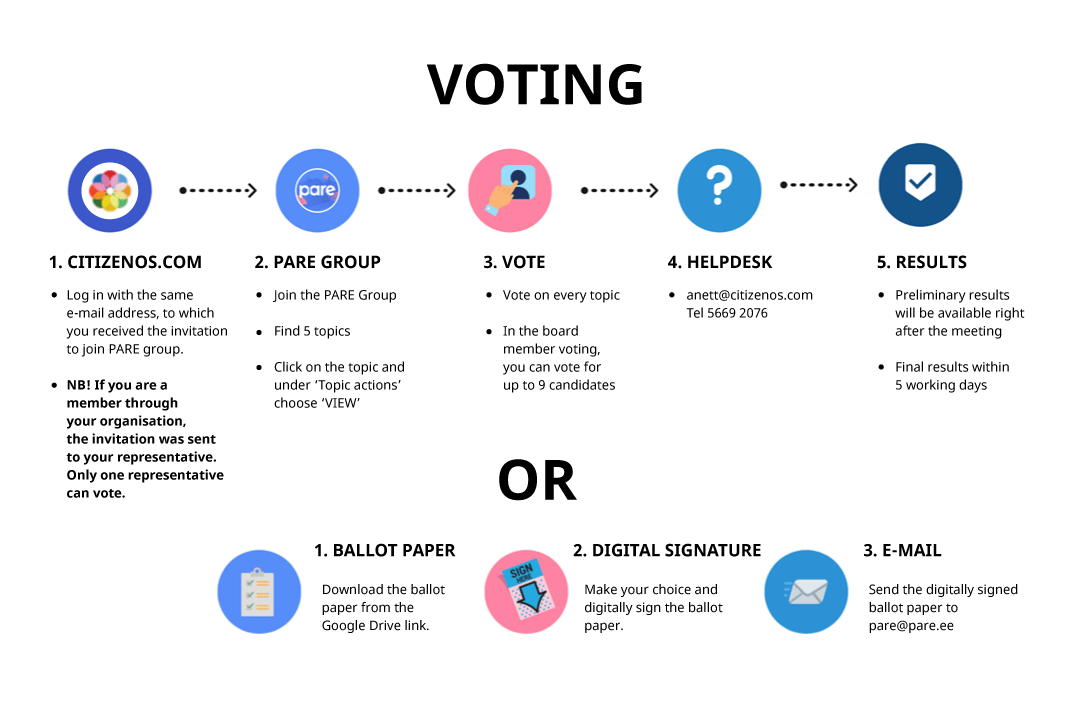 We had set it up so that it would be possible for members to vote right from the start. We encouraged members to go on and familiarise themselves with the platform and voting process in advance of the meeting, to avoid any technical difficulties on the day.

We were pleased that we’d been able to get a discussion started in the lead-up to the meeting. Our good preparation made it possible to conduct the e-meeting smoothly and efficiently.

Great to hear. So how did it go on the day then—the voting during the meeting itself?

We held the meeting on Zoom, but people could access the platform and cast their votes at the same time. Though actually by the time the general meeting started, most of the members had already cast their votes. But the system allows members to change their votes at any point before the deadline, in case their decision was swayed by the discussion.

One positive thing was that voting is anonymous, and the results of the votes weren’t visible until the voting had closed. So there was no question of people being influenced by votes already cast.

I closed the voting right after the meeting, and after adding a few votes that had been sent by email we were then able to announce the voting results immediately after—no need for manual counting! We also saved time on the meeting itself, as due to our good preparation and the pre-meeting discussions online, we were able to run through it all quite efficiently.

Thanks so much for sharing that with us. Any parting words?

It was great to have members of the Citizen OS team on hand during the meeting itself, just in case a participant had a technical problem and needed help. And in general, I felt at ease implementing this new process thanks to the constant support from Citizen OS throughout, and their willingness to find solutions to any problems.

We received recognition from our members for finding an innovative solution to the problem, and we can now happily recommend it to other NGOs and professional associations.

Virtual and hybrid meetings are the new norm, and once great e-environments have been set up, it is quite easy to hold meetings in this way. So we’re very grateful to the Citizen OS team for that—thank you!

Next, we caught up with our Partnerships Lead, Anett Linno to hear her thoughts on the collaboration. She explains how PARE’s adoption of the Citizen OS platform is a shining example of how to take a new technology into use:

“The adoption of a new technology within an organisation requires a certain amount of planning and preparation. Our Citizen OS platform is no exception, and over the years we found that success depends largely on how well the organisation implements the deployment process.

It was a great pleasure to work with PARE, who closely followed the four key steps to a successful roll-out.”

And what are these four key steps? In our experience, they go something like this:

Considering using the Citizen OS platform for your own organisation or civil society group? Get in touch with Anett at Anett@citizenos.com—she’d love to chat.