Is the time of representative democracy over - Estonia without a parliament?

This was the title of a discussion at the Opinion Festival in Paide, Estonia this summer, which I attended with great anticipation. The discussion was all the more intriguing as one of the panellists was Eiki Nestor, a long-standing member and president of the parliament. Although engaging, the discussion at the very beginning only superficially touched upon what was promised in the title. 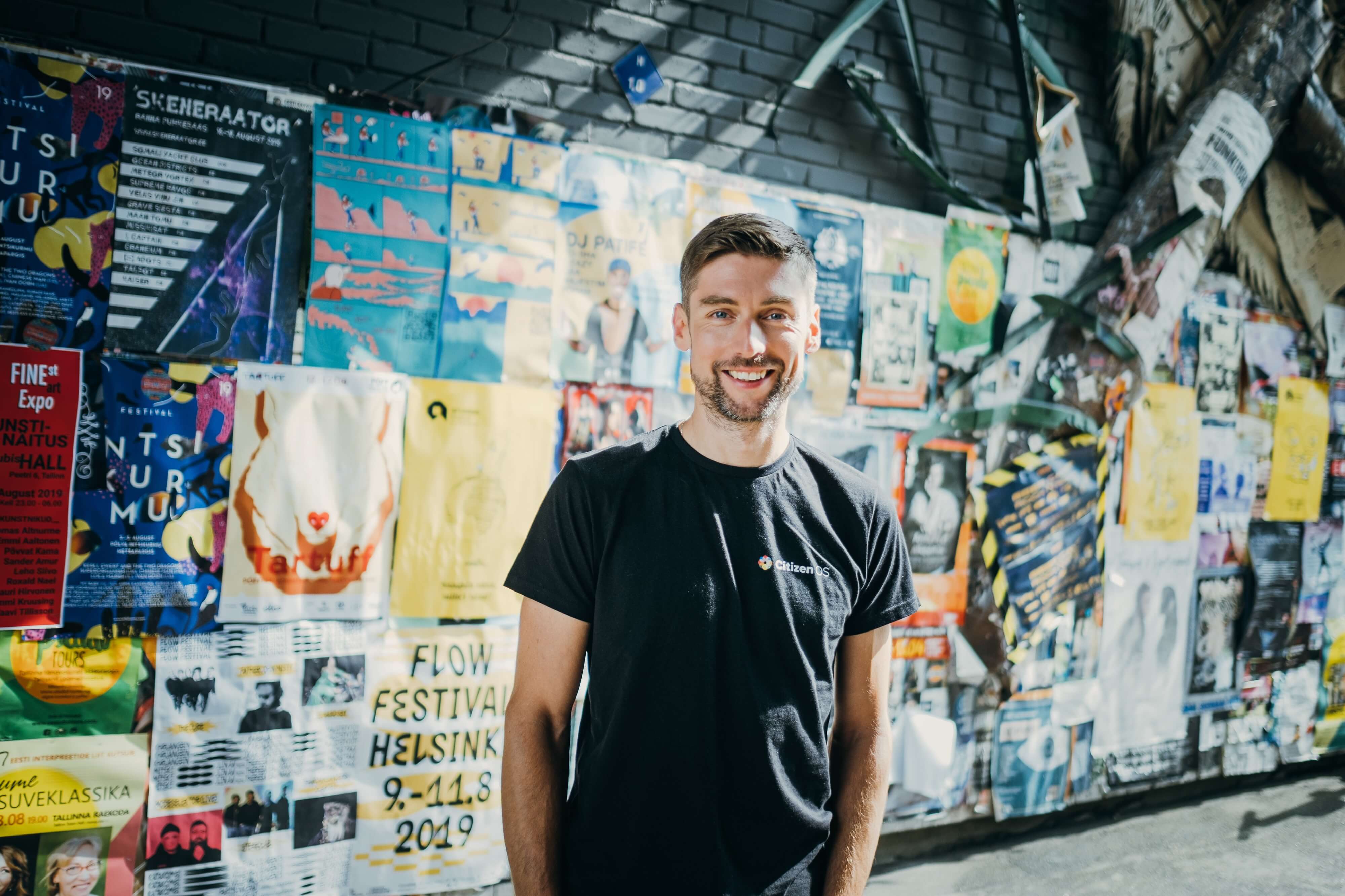 Political events across the democratic world have created a ghost – the ghost of direct democracy. Populist movements everywhere demand that the people’s voice be heard more, mostly in the form of Swiss-style referendums. What is not understood is that a Swiss referendum and something like the Brexit referendum in the UK are as different as night and day. The former is a well-established tradition in which people are used to delving into the issue being voted on and are supplied well in advance with materials explaining in depth the arguments for the views of the various parties to the debate. In the latter, populist leaders carry out campaigns presenting slogans and lies to a public not used to regularly participating in referendums.

Take a closer look at whether binary alternatives are as black and white as they are presented to us, and if not, then what can be found between the opposite ends of the scale.

In antiquity, once the idea of free male citizens debating and voting on the central square was no longer feasible on a scale larger than city-states, democracy naturally developed toward the election of representatives and their subsequent professionalisation. This paved the way for political parties and career politicians. Now, with the arrival of information technology that provides the public broad access, it is at least technically possible once again to involve all citizens in public discussions and decisions.

The technical need to go about business through representatives, which first disappeared in the economy with the removal of intermediaries from the value chain, is now about to disappear in state governance.

The question is what the model will be like that gives citizens more direct access to public decision-making.

Another interesting question is: while technology has greatly contributed to globalisation in economy, is the same happening in governance? In the second half of the 20th century, anyone who wanted to travel would go to their local travel agency to buy flights, book hotel rooms, etc. Today, the British, Estonians and Indonesians alike buy their tickets at expedia.com and book their rooms through booking.com. The business of local travel agencies as representatives or intermediaries has shrunk dramatically. Democracy and governance still look very different in different countries, without a single dominant model or platform, but work toward creating one has already begun.

When I went to the discussion in Paide, I was hoping for a search for such a model, by a group of highly intelligent experts going through the entire scale of governance systems. Unfortunately, what happened was typical: those practising the current model underestimate the importance of changes and look for ways to harness the changes merely to make minor adjustments. The discussion was interesting, although it mainly focused on how the parliament could use information technology to work more efficiently. If Uber and Airbnb have taught us anything, it is that people look to technology for dramatic changes rather than marginal improvements. Users did not want an app that would slightly improve the way they talked to the dispatcher; they wanted to get rid of the dispatcher and track the movement and availability of taxis themselves. As citizens, we may similarly not want an app that only slightly improves the way we talk to parliament – but this is exactly what the discussion in Paide was about.

Let’s try to imagine what the democratic governance of communities and society could look like, at least in Estonia – not just a slightly more efficient parliament or a lot more referendums through our famous digital election system, but something between or beyond the two. Above, I gave examples of platforms from the business world and am convinced that they point the right way ahead, but I certainly don’t intend to idealise them. We are already aware of a number of problems with these platforms. This gives us an opportunity to learn and do better once the democratic governance of our communities and societies moves to the digital realm. We already know that it is not a good idea to attempt community decision-making in a Facebook group.

Citizen assemblies have been held in Estonia a few times. The model of a citizen assembly is essentially clear:

How can people participate if they have to work? When a person is summoned to reservist training in the Defence Forces, the government pays the person for the period of training and the employer must allow the person to attend the training. Of course, the period is much shorter, but there is nothing unprecedented about the idea itself. Also, participating in a citizen assembly does not require physical presence, as the work would be done through an online environment similar to citizenos.com or rahvaalgatus.ee. Participating in public discussions will not take up 100% of the person’s waking hours.

People are dumb. Didn’t they vote for Brexit? Before the first citizen assembly in Estonia, everyone was sure that the assembly would support direct presidential elections. However, it turned out that if people are informed of the consequences of their choices, given an honest explanation of the content of the decision and actual responsibility for the decision (as opposed to an opinion poll that entails no responsibility, for example), people gathered by random sampling are able to make rational and reasoned decisions. This requires proper preparatory work, a professional discussion leader or environment, personal responsibility and a possibility to study the topic. We can provide all that to parliament members who are not nearly all professionals in public governance, but have various backgrounds in terms of education and experience.

But the parliament makes so many decisions – the people in a citizen assembly do not work in this capacity full time, so isn’t it too much to expect them to handle so many issues? First, the parliament need not disappear. We can introduce a citizen assembly as another parliament chamber that handles principal decisions and public initiatives, leaving matters of a more technical nature to the Parliament (e.g. a draft act ratifying an agreement between the governments of Estonia and Japan concerning tourism with the right to work). Second, it is not certain that the current level of legislative drafting in the parliament is indeed necessary. The issue of excessive legislative drafting has been pointed out by Chancellor of Justice Ülle Madise and Auditor General Janar Holm, among others.

A regularly rotating citizen assembly, if it worked instead of and not in parallel with the parliament, would eliminate the need to elect representatives to the parliament every four years. This in turn would eliminate the need for elections and election cycles and considerably reduce the role of political parties as dispatchers in society. Once it becomes impossible for businesses to lobby their interests into laws, they will lose their intensive enthusiasm for supporting political parties. People can still unite within non-profit organisations based on their views, and we can still call these organisations political parties, but they would not have such a central role in society as they have today. Naturally, they would be able to make proposals to the citizen assembly just like all other citizens. In parallel, there should be another, more professional channel for legislative proposals, through which ministries could make their proposals. But as in the US judicial system, where professional attorneys prepare the case and then have to make it clear enough and convincing to a jury of ordinary citizens, the proposals by ministries in our model should go through an open phase of brainstorming and collect enough support from citizens. 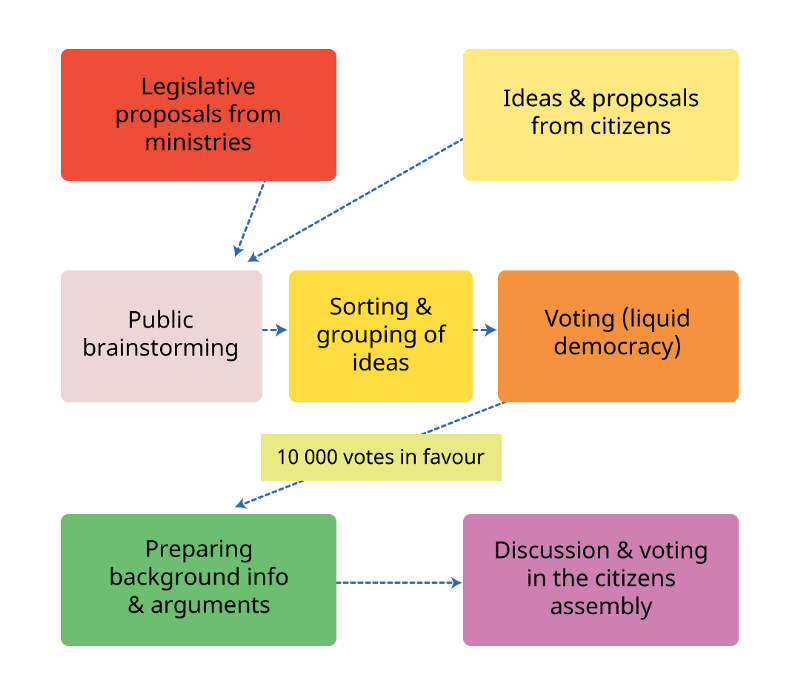 An outline and an example of a possible alternative model that invites the reader to think about what falls between representative democracy and direct democracy. Image by Becca Melhuish.

It is important to note that this model does not include regular elections, but people would not lose their voting rights in addition to the right to make proposals. Quite the contrary, while so far we have been able to “give away” our votes once every four years, we would now be able to vote on proposals on a continuous basis during the open brainstorming phase. For example, proposals that have received votes in favour from at least 10,000 citizens and fewer votes against, could move on from the brainstorming phase.

Does this mean that as a citizen, I should use the citizen assembly app and vote on proposals every day? Not necessarily. This is where the notion of liquid democracy comes into play. I could delegate my vote. In all proposals concerning the sphere of medicine, I would permanently delegate my vote to my friend Andreas, who is a doctor. I can still cancel my delegation at any time. When I go on a holiday for two weeks, I delegate my voting right to my sister, whose views are quite similar to mine. When I am back from my holiday, I take my vote back again. Perhaps someone will delegate their vote to me occasionally, but I will not know about it, so as to avoid any intentional vote-collecting. Also, if more than 1% of all voting people wanted to delegate their votes to me, the system would refuse that, for the same reason. This is what liquid democracy means – a constant flow of votes between people depending on the subject, competence and ability to participate, without the creation of any concentration points.

Naturally, this short article is not a detailed plan for constitutional amendments. Rather, I hope it’s an outline and an example of a possible alternative model that invites the reader to think about what falls between representative democracy and direct democracy and whether we can create a model that we believe in to start governing our state. If we can do that, we could test it on a municipal level or as a shadow parliament.

Everything that can be digitalised will be digitalised; I am convinced that in the mid-21st century we will make our decisions differently to the way we did in the 19th or mid-20th centuries. I very much hope that we will stick to the democratic model, although representative democracy is going through deep crises and in order to effectively tackle issues such as global warming, we need decisions so quick and powerful that democracy seems to be at a serious disadvantage to more authoritarian decision-making mechanisms. I recently came across a column in New Scientist where the editor admitted that if the choice was between saving democracy and going down with civilisation or sacrificing democracy and saving civilisation, he would choose the latter. In a world were China is at the forefront of various green technologies (such as the electrification of transport), the dilemma is not as hypothetical as it might seem at first glance.

The survival of democracy as a system may well depend on whether and how we can create and test e-democracy solutions in Estonia and successfully introduce them to the world. Even Swiss delegations have repeatedly visited Estonia to see how e-democracy could function, and have done so with good reason. They see that their model was exemplary in an offline world but no longer meets the needs of the new generation. We were able to set a global example with e-services; now it’s time to repeat that success story with e-democracy.

At the Citizen OS Foundation, we are creating an international network of people and organisations to think together on these topics. Get in touch and join us!