Where is participation heading and how can each of us change it?

Margo Loor, the CEO of Citizen OS and Development Manager of SpeakSmart introduces himself as follows: argumentation coaching, debating, open society and freedom of expression themes have been a passion for me for a long time within different initiatives and organisations. Helping to prepare the moderators for the People’s Assembly, being part of the founding group of the Opinion Festival, working as CEO of the Estonian Debate Society and chairman of the Network of Estonian Nonprofit Organisations are some examples of my work. Today, I carry out argumentation-based communication, decision-making and management training at the social enterprise SpeakSmart, and lead the creation of community-based e-decision software Citizen OS. 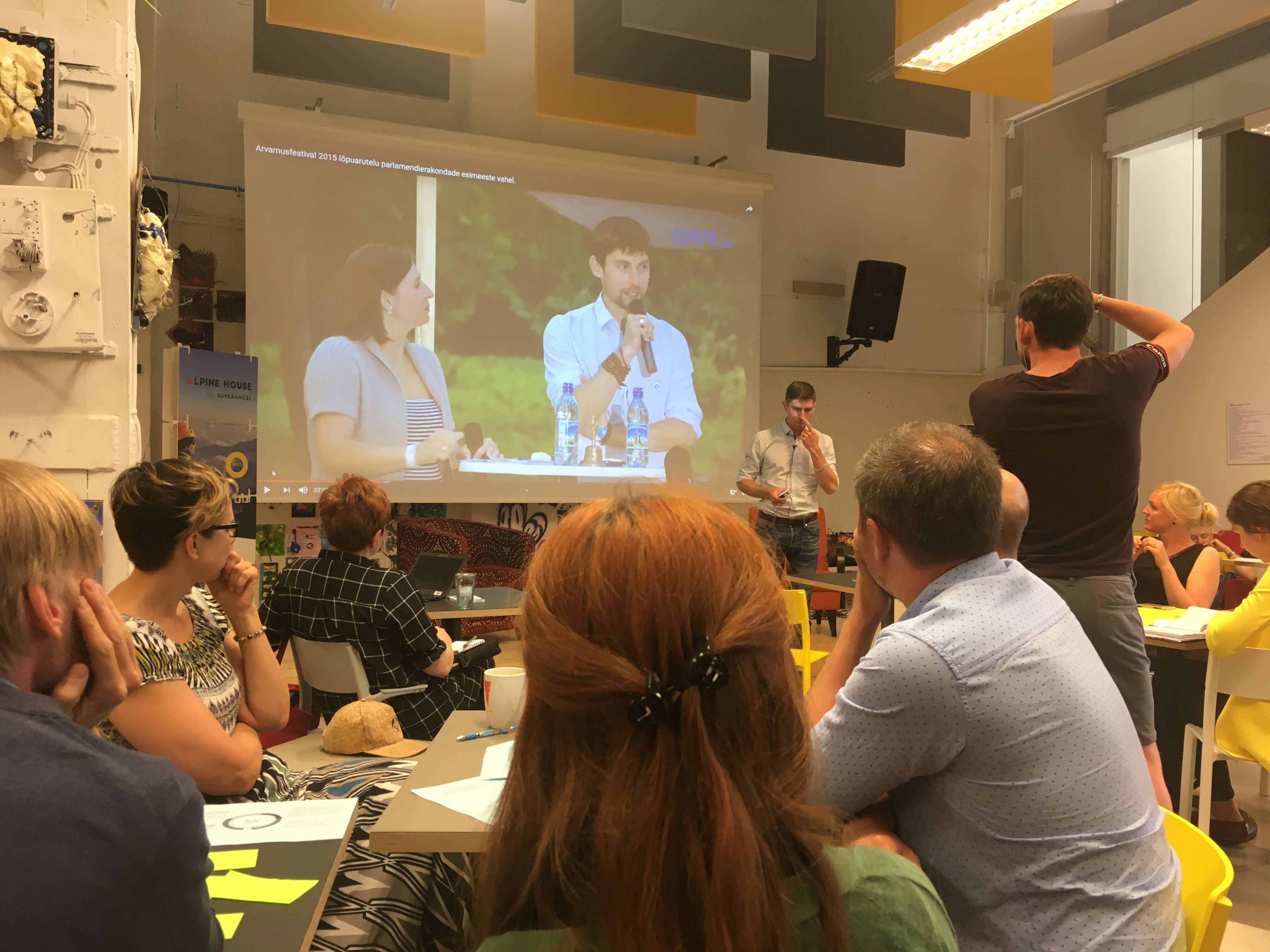 Margo Loor giving a workshop to the moderators of the Estonian Opinion Festival.

Regarding people’s participation in decision-making today, what is the current situation? Do people participate?

Very actively. Technology has made participation much easier than before. People read blogs, follow news, comment, support petitions and initiatives. We are talking about democratic crises in the world, the echo chamber, the fake news problem, but we often exclude the point that those are the other, negative side of the coin. The positive side of the same coin is that globally, never before have so many people been involved in so many decisions. Sometimes this participation is limited to a click on the Like button or a one-line comment, but in many cases, however, involves hours of volunteer work, donations, discussions, and all this through the Internet. Such a “participation avalanche” has hit both public structures (such as the media, government, the parliament) and also the people themselves in such a short time that the adaptation of skills and systems has not always kept pace. People want to participate, they have the opportunity to participate, but do not always very well know how and on the other hand, decision-makers do not know how to engage people in the best way.

It will take some time for our collective life arrangements in various countries and in the world to learn to cope with these contradictions and this speed. Ten years ago, most people had no idea what Facebook was. Five years ago, Facebook had one billion users. We must seek together how to make participatory decision-making work best.

It’s natural to want to be involved in decisions that have an impact on your life. There is also a difference in whether a decision actually has an impact on your life or you only think it will. For example, people have been very actively involved in discussions on the refugee issue both here and abroad, because spokespeople have amplified the importance of the matter. People therefore feel that decisions concerning refugees will have a major impact on their lives and welfare, and they want to be actively involved, even though the number of refugees in Estonia is negligible and the related costs have effectively no impact on anyone’s daily life. In 2017, a People’s Assembly on the Future of Ageing was held on our Citizen OS platform, in which people participated quite actively, because we will all get old and want to have a good life when we’re old. If an issue is distant or too abstract, people either feel incompetent or are not willing to discuss it. When a draft law on private detective services was posted on osale.ee for public consultation, only one opinion was received in two months. Studies conducted at the University of Turku have shown that people participate much more actively when they see the outcome of their participation and the fate of their vote. It matters even when their preferences do not win the vote. Overall, people want to participate in deciding matters that have an impact on their lives and if they understand what will change as a result of their participation.

Speaking about the future of participation, what do you think it will be like? Where is participation headed?

For one thing, there will be more participation. People, especially young people, want to participate more; they are far more accustomed to having their opinions asked and heard than older people are. There used to be a saying: “A child speaks when a chicken pees.” Today, every young person can make their opinion heard through social media, school media, youth organisations, participatory panels, student representative boards or other forms of participation.

Secondly, decision-makers will have more trust in participation. Today, people are sometimes involved in order to actually reach the best decision, but sometimes just because the law requires participation, although there is no actual experience of its value. The better we learn to make participation work, the more valuable it will become, and the less it will be used to just tick the box.

Another point is that more decisions will be made directly, without representatives. To put it more formally, participatory democracy will be replaced by delegative democracy. Our votes will become more fluid. Simply put, we will be able to decide more matters ourselves, without a village, municipal or state government. Matters such as the planning of a beach or a playground, which were previously decided by the city council, will be decided by the community without the involvement of the city council.

How do you think the attitudes of decision-makers have changed toward the involvement of people in decisions? Have they become more open or not? Has there perhaps been no change at all?

I will answer by giving an example. A People’s Assembly was held in Estonia in 2013. Five hundred people selected randomly from the voters’ roll met and decided matters concerning state governance and funding for political parties. One of the matters voted on was direct presidential elections in Estonia. The Estonian Centre Party had been saying for years that people wanted to elect the president directly. Decision-makers were sure that the People’s Assembly would support the proposal. Thorough explanations on the background for each decision, as well as the impacts and consequences of voting for or against each proposal, were given to the people in the assembly. The proposal on direct presidential elections was not supported by the People’s Assembly and nobody has publicly promoted the idea in Estonia since.

What are the three things you would advise young people to do to be able to participate in decision-making even more?